We got down to Pigeon River Trading Company General Store today. We had a fun day exploring and shopping. It rained this morning, but had cleared up by noon, so it was a cool, partly-cloudy day.It took us about an hour and a half to get down to Lafayette (la FAY ette) GA. The directions were really clear and it was really easy to find. 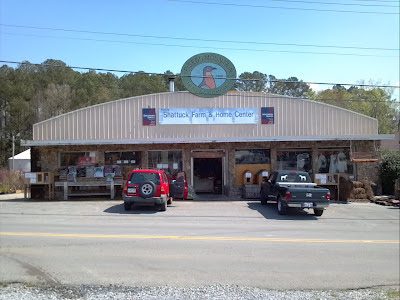 It looks like any small town hardware feed/seed store and it is. Except most of it inside is extractors, frames, hive boxes, bee suits, observation hives, and other misc. bee stuff. There's hives in the back of the store. I don't think they have their entire internet catalog inventory in the store. There were several other buildings on the block that had their logo on it where I'm sure they store a lot of stuff. You can buy onions, potatoes, etc., for your garden there, too, and overalls, washboards, wood stoves, all kinds of general store stuff. 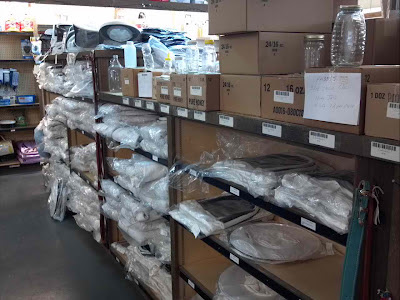 I bought a ventilated bee suit. They didn't have my size, so when I asked, they went to another warehouse and looked around and found one for me. The lady behind the counter was answering the phone advising people about bees. It sounded like some guy had bees bearding on front of his hive already and she was advising him about that. So they're really knowledgable bee folks there. I was impressed. It's a friendly place. There's a good video on their home page done by a Chattanooga TV station news department about the store that shows different aspects of it, too. 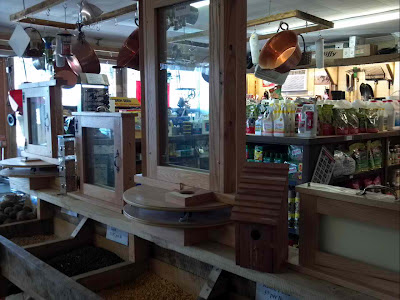 They had some observation hives there in the store and one had bees in it. I had never seen one in person before and these were quite unique. They are totally enclosed, and have an entrance feeder built in at the bottom. They spin on a lazy-susan type deal so you can see both sides.I may go back this fall and buy some overalls there. They sell Pointer Brand overalls still made in the USA (even Liberty overalls are made in China now.)
Posted by Greg at 8:11 AM