I looked in all four hives today in the top feeders, and they were all plumb full of bees wall-to-wall. I guess that's what they needed. I hope it helps them to draw out more comb and have more brood. I feel like I made the right choice with the feeders.  I'll keep you updated.
Posted by Greg at 11:03 PM No comments:

Well, I went into the hives briefly today. It's odd how I never seem to find what I think I'll find when I go in to the hives.

I did have bare-frame deeps over the brood deep, and below the partially filled with honey and comb supers. Today there are 1.5 to 3 frames with brood in each middle deep. The supers still had comb and some honey. All boxes had a lot of bees.

So after thinking a little bit about the conditions of the hives, and the time of year (and mumbling a lot), I made the command decision to go ahead and put the feeders on each hive. I won't get any honey this year, but hopefully they'll finish building comb and have plenty of stores for the winter.
Posted by Greg at 4:58 PM No comments:

Experiment That Didn't Go Too Well

My plan this year with two packages and two nucs was to try to get two deeps on each hive filled with comb and brood, and have strong hives going into winter.

I had about twenty five medium frames drawn containing half-capped honey in the freezer from last year. My thought was that after the bottom deeps were full, I'd take the feeders off, put another deep with bare frames on, then put the medium supers with the frames evenly divided between the four hives. My thinking was that the bees would travel up to the frames with honey, and maybe decide to draw comb on the middle deep while they were traveling.

I looked in the hives yesterday to make sure there weren't any wax moths, SHB, etc., and to see if they'd drawn out the middle deep boxes. Well, there was hardly any comb drawn on the middle deeps, and the honey was mostly gone from the top mediums. (Note 1:  I use plastic frames, but they drew out the ones in the bottom deeps great. Note 2: Three hives are 8-frame and one is 10-frame, but they all look the same inside.)

I don't know why they didn't build out the comb on the middle deeps. It's been awfully rainy and cool this summer thus far. Maybe that has something to do with it. Maybe I should have kept feeding them all summer (although there was some flow this year, and I thought that would suffice).

So now I'm thinking that it's getting late in the year, and that I'd better take the top supers off, and start feeding 1:1 syrup so that they might draw out some comb. I also got the suggestion to move a couple of frames of brood up into the upper deep to encourage activity in that level.  If that doesn't work, I guess I'll have to remove the middle layer deeps and put the medium supers with the drawn comb on top of the bottom deeps and see if they'll fill that with honey for the winter.

Hopefully Monday I can mix up some syrup and get the feeders on.  Hopefully, the bees will get the hint.

Updates will be provided when/if they happen!
Posted by Greg at 3:05 PM No comments:

The Swarm is Gone

Friday the swarm looked lively and was bringing in pollen. Today, there's not a bee alive. I had a jar of syrup on top of the inner cover with a box around it, but maybe all this rain and them not being able to get out, plus they were a small swarm had something to do with it. There's some dead bees on top of the inner cover. I didn't take the time to look in the frames. I'll go into it tomorrow morning. I hate it for the bees. But I've learned some lessons and hopefully the next swarm will fare better.
Posted by Greg at 6:58 PM No comments:

Dealing With the Swarm on Tuesday

Well, I went out there this morning and the swarm is still on the limb. I don't know if they stayed because it got dark before they got into the hive, or maybe they're still not happy with how I cleaned out the box. If they're not in the hive in a few hours, I guess I'll have to get into my bee suit and put them in the box. It just doesn't seem like they can stay that way very long. They've been there around 24 hours now through 3 thundershowers. Where they're at is where the swarm trap was before I put them in the hive the first time.

Update 1:  So they're still on the limb at 1:00 pm EDT. I guess I'm going to have to suit up and put them in the box. I would have thought the LGO cotton ball would have lured them back into the hive, plus the fact that I moved it to about 3 feet from the limb they're on. Silly bees. I don't know what they're thinking. I hope the queen is ok.

Update 2: I put the hive box under the swarm, removed four frames, and, like the good hands people, I gently scooped them into the box. It's a small swarm (about a pound)(but many may have been out scouting or foraging). I put an entrance feeder full of syrup on top of the frames and put an empty super around that. Hopefully, that will be encouraging and welcoming enough for them to say this time. If I go out there this evening and they're back to hanging on the limb, I'll just give up.

I have learned a lot from this experience. I don't think I'll use the flower pot-type swarm trap any more. I'll just set a hive box with frames out so they'll get started right. Hopefully next year I'll have some drawn comb frames that I can put in the swarm trap to maybe make it more attractive. And I don't think I'll do any cutouts. That comb is a sticky gooey mashy mess. And, although I kind of knew it, now I really know that bees will do what they want to do.

I was really surprised the swarm hung under that limb through three thundershowers. They must be tough bees.

But, so far they're staying in the box. I hope it goes better this time around.

Here's the hive right under the limb where the bees were hanging: 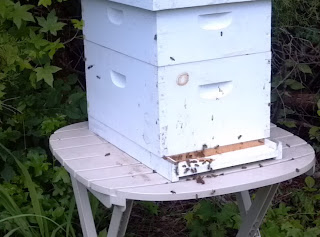 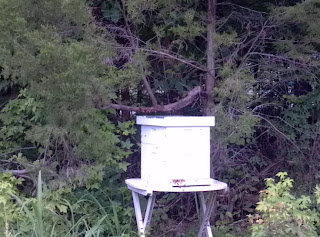 I May Have Dodged A Bullet Today

My Dad called a little while ago and said he thought the queen in the swarm I hived recently must not be doing very well. He said there was a swarm on a tree limb this morning close to the hive where I put the swarm. I told him that it had rained pretty hard a little while ago and it's doubtful they would still be there. But I went out and looked and they were still there. I was only going to pop the top and see if I could see a reason for them swarming, but there were a few bees on top of the inner cover around the entrance feeder I had there, so nothing unusual. So, since I had long gloves on, I took the feeder out and lifted the inner cover.

Little worms everywhere. The comb I had tried to move from the swarm trap to empty frames in the hive had all kind of fell/melted into the bottom of the hive and there were hundreds (if not thousands) of little worms all in it. I guess the reason they had swarmed was they really were absconding. Luckily, they were only about 10 feet from the hive on a limb. So I took the hive box apart and cleaned out all of the frames, and scraped the comb/worms off of the bottom board. I set the comb and the frames out in the sun (from what I have read, wax moths and larvae are kind of like vampires: They really don't like the sun). I got some new frames and put them in the deep box and added a cottonball with some lemongrass oil on it, put the inner cover on and put the feeder on top and put the lid on. Me and Dad moved the hive box next to the limb so the swarm wouldn't have far to go and maybe they would smell the lemongrass oil and move back in. I tried to clean it up as well as I could. I told Dad either they will go back in or else they won't.

Here's the hive box and where the swarm was when I got out there to it:

And here's a close up of the swarm:

I did hear a very high pitched humming sound coming from inside the hive box after I had it reassembled. I don't know if it was a scout bee signaling the other bees. My initial thought was that it might have been a queen piping. It was such a unique sound, very different from any buzzing noise I had ever heard. And it was loud, too! Just one more thing for me to wonder about.

Anyway, I'm keeping my fingers crossed they will stay.