Small Hive Beetles and Other Observations

The swarm has been taking about a pint of 1:1 sugar syrup a day.  I have an entrance feeder on top of the inner cover with a super around it.  Yesterday when I changed out the feeder, there were five or six little black bugs that were under it that went scurrying away.  Small Hive Beetles (SHB).  My luck ran out.  They finally found me!  I knew it was going to happen one of these days.  I had ordered some beetle jails to have when they arrived.  So today we went into the hives for an inspection to see the extent of the SHB and the general condition of the bees.

I'm still not sure how or why the SHBs are in the swarm box.  There's hardly any comb drawn, and there's no honey.  My guess is that they either came in the swarm, or they were attracted by the Honey Be Healthy I put in the sugar water.  Today when we opened the hive, there was only one SHB, so the bees have taken care of the others, or the others have found better hiding places.  Here is a picture of what a SHB looks like compared to a bee: 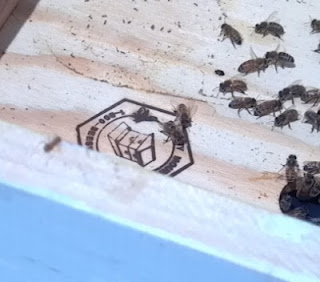 And this is what a beetle jail looks like:

They're plastic and the lid is hinged so that you can open it to empty out the beetles and refill it with mineral oil.  I ordered some Freeman Beetle Traps today for the hives.  They are like a screened bottom board, but the screen has slightly bigger holes so the beetles can fall through.  And there's a tray full of mineral oil underneath to drown the beetles and mites that fall through. That's much easier than tearing into the hive to change out the beetle jails.  By the time they get here, the beetle jails should have started working.  So we'll see.

The swarm was busy making comb and other bee things.  They seem happy in their new home: 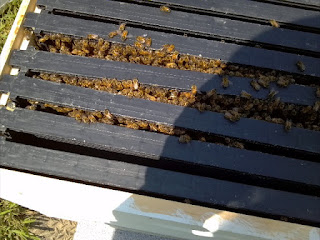 So we went into the big hive and looked around.  There had been a 10-frame super full of capped honey the last time I was in there.  Today there was 7 frames partially capped.  I guess they've been having to eat the honey.  The drought, high temperatures, and stressed plants have put the bees in a dearth I suppose.  I'm glad I left it in there and didn't harvest it.  Hopefully there will be a fall flow and they'll fill the supers up with honey.

One of the things that bees do is build drone comb in between levels of frames.  When you take a super off, it opens up those drone cells to expose the drone larvae.  Varroa mites prefer to lay eggs with drones.   Here is a picture of a drone larvae with a mite: 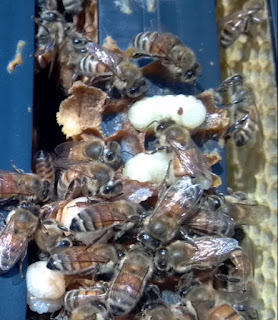 I also spread some Diatomaceous Earth (DE) around the hives.  This is microscopic sea shells that slices bugs up that crawl through it.  The SHB larvae that are ready to pupate leave the hive and burrow into soil near the hive.  When they crawl through the DE, they are sliced up and die.  This also is supposed to work for ants.

Next update when the new Freeman Beetle Traps get here.  Stay tuned.
Posted by Greg at 9:47 PM No comments:

1st Swarm Experience (and I got to help, too!)

I got a call at work about a swarm of bees on a crane.  They needed to use the crane, but they didn't want to kill the bees.

I had never actually dealt with or even seen a swarm in person.  Luckily, there is an experienced beekeeper that works there, too.  So we gathered up what protective type equipment we could scrounge, a cardboard box with a lid and headed out there.

Time was not on our side, so we had to act quickly.  It wasn't a "textbook" capture, but he did the best he could with the bee's welfare in mind.


We taped the lid onto the box with duct tape (duct tape will fix anything!) and poked a lot of air holes in the box.  We kept the box in a cool place until quitting time.

When I got home from work, the bees were still ok.  I had a general idea of what I wanted to do.  It seemed to me that I should treat this box of bees like a package of bees.  So I cut a "window" in the end of the box and sprayed them with sugar water and let them sit for 15 minutes:

While they were "resting", I sprayed the frames with sugar water to hopefully make them more appealing to the bees.  I have an 8-frame deep and had three frames out initially to make room for the bees:

I gave them about an hour and checked them. There were only four or five bees at the entrance. I put in the entrance reducer and put a block of wood over the hole. I was advised that it would be best to put the hive in the shade for a day or two while they got settled, so I did. I blocked the entrance (the hive has a screened bottom board) so they wouldn't be oriented to this location. In a day or two I'll move it to where I want it and unblock the entrance, so they can orient on the hive then.


General observations: It was my understanding from what I've read and heard that swarms are docile.  Also, I thought sugar water calmed them down. It may be true. However, in this instance, neither were true. It was as though I had took a big stick to a hornet's nest. These bees were MAD and were really coming after us the whole time (except for right at the end). Luckily I didn't get stung, but my dad got one sting through a glove.

It is true, however, that if you put the container with the bees that don't shake out next to the entrance, that they will all march right into the hive. I thought that was amazing.

Overall, I think it went ok for someone that never had done it before. They may abscond the day I open the hive. But they may stay. We'll see. But I think it was a good day and I've learned a lot. I have some days off now, so I can give all the bees plenty of attention and TLC.

I hope you enjoy the pictures.

UPDATE:  It rained Friday so the bees had a cool day to adjust to their new house.  Saturday was a beautiful day - low humidity and lots of sunshine.  We took the hive out to the yard and opened the entrance.  The bees came out, oriented, and flew off looking for food and water.  I peeked into the top and the entrance feeder had not tipped over during the move (that's good!), and there were lots of bees on top of the inner cover.  So, at this point, I think they're doing ok.  I plan on feeding them  a lot, and hopefully before winter there will be two deeps worth of stores to get them through until spring.  Here's some pictures of the hive out in the yard:

Some Good and Some Bad

The month of June was super hot and super dry, so all the good clover and other plants wilted or dried up.  Luckily, we live close to Watts Bar Lake so they have access to plenty of water.

I haven't had much time to devote to the bees for the past month or so.  When I finally did get back into the hives, I found that the main big hive has one super full of honey, and two suppers filling with honey. I'll check back in a couple of weeks to see if they're making progress on the honey.  I sure hope so!

The split I made had not fared as well.  The last time I looked in it, there was still no queen, so I gave it another frame of eggs and bees and hoped it would take off.  Well, it didn't work.  The bees went to the other hive or died off.  The wax moths moved in and so I've got  a lot of frame scraping to do.  Here's some pictures of an 8-frame hive that has been taken over by wax moths.  I hope none of you see this in real ilfe: