I Hived A Swarm Today

What a time Dad and I had today! There's been a swarm living in the swarm trap for over a month now, but I haven't been able to do anything with it until now.  I got an 8-frame hive assembly ready to put the swarm from the swarm trap in. The swarm trap is one of those flowerpot looking things from WT Kelley. 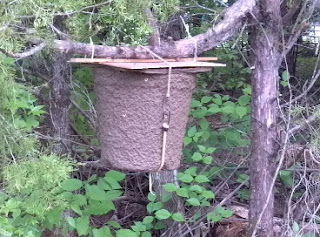 I got some empty wooden frames and some fishing line that I wrapped around them. Got the smoker and tool box and stuff up to the trap. Set the hive on a table a few feed away from the trap. Took the trap down and had to really pry with a hive tool to get the top and bottom separated. There was 5 big combs hanging down from the top. I shook the bees into the hive box and sat the top down on the ground with the combs sticking up. I took the hive tool and pried the combs off the top. I laid them down on the frames in the box until I had them all off of the top. Then I tried to put them into the empty frames with the fishing line. I learned I can't tie knots in fishing line while sweating profusely and wearing gloves! Then a thunderstorm came over and it rained hard for a few minutes. It cooled us off, but I don't think the bees liked it much. When I tried to put the comb in the frame, it just bent and broke and was a mushy mess. I really don't know how the big time bee folks do it. There must be a secret to it. But I stuck them in there as best as I could and I hope the bees straighten it out. I am thinking that they'll adjust the comb to allow for bee space, and hopefully connect it to the top. I have four empty frames for the comb in the center, and four regular frames (two on each side) on the outsides. I tried to get as many bees as I could into the hive. I hope I got the queen in there. I sat the top and bottom right under the table with the hive on it, so hopefully they'll realize that they live in a new house now. I'll probably give them a few days to adjust, then I plan on moving the hive a couple of feet every day until I get them where I want them to be, down with the other bees. I'm sorry I didn't get any pictures. Between the sweat and the rain and the bees and the ticks and the gooey comb, I pretty well had my hands full.

The moral to the story is this: I'll probably not use a flowerpot swarm trap again. I'll just get me a hive assembly and put some frames with old drawn comb in there.